All You Need is a Clickbank ID and You’re Set!

Every time someone clicks on your unique link to our website and signs up… You will receive 25% of the net profit!

How do you get paid?

The world’s largest digital fulfilment company – Clickbank handles the sales processing and payment to affiliates. To join this affiliate program you will need to obtain a unique referral ID with Clickbank (see below). It’s easy to set up and free to join. Clickbank sends cheques out twice a month, and once you have a couple of months worth of regular trading history with them, you can set up an automatic direct deposit straight into your bank account. They provide free online statistics with real time updates, so you can see how much commission you have earned at any time. After you obtain your referral ID (login code) and password, access their site for full details. They are an excellent company to deal with and are well regarded among the Internet community.

How do you start?

Get set up with Clickbank (It’s free and takes about 2 minutes).

Promote Your Link and Earn The Commissions!

To tell you the truth, we want you to be successful and earn commissions from the sale of our program. Here are a few simple suggestions to increase your sales.

Send out an endorsement testimonial email about our program. If you are regularly contacting your online list, client base or friends by email, then you will have built up a level of trust with them. We don’t suggest that you actively endorse and promote a product that you don’t believe in. That will diminish your credibility with your list. You really need to take the time to go through the program. We suggest that you buy it first, then after reading it, you will be convinced yourself that it contains high quality content and represents excellent value.

Prepare a blogpost about the program and add it to your blog. This could be in the form of an outline of the content, it could be a discussion around the topic or it could be an anecdote from your own experience. Don’t forget to include a keyword link to our website. The link of course is your special affiliate link. You may even think about creating a permanent banner on your website or blog which links through to our website.

Use the power of social media to promote the program. Talk about it on Facebook and Twitter. Make this a discussion rather than a blatant sales message, as after all these are social sites! As an affiliate, you have our permission to copy any of the text, images or testimonials from this website to help you with your promotions. (Please note: the contents of the program are copyrighted and you may not use any material from the program for promotions.)

Best wishes for building a healthy passive income stream from promoting our program!

Bendigo Advertiser announcement of the funding for our on-farm alliance.

Announcement of the funding for our on-farm alliance.

Blog post by Wallers Realty about the innovation that is the alliance.

Article on the ABC County Hour about the resurgence of cooperatives in agriculture, including mention of Mt Alexander Fruit Gardens.

Co-written article all about grafting fruit trees in PIP magazine 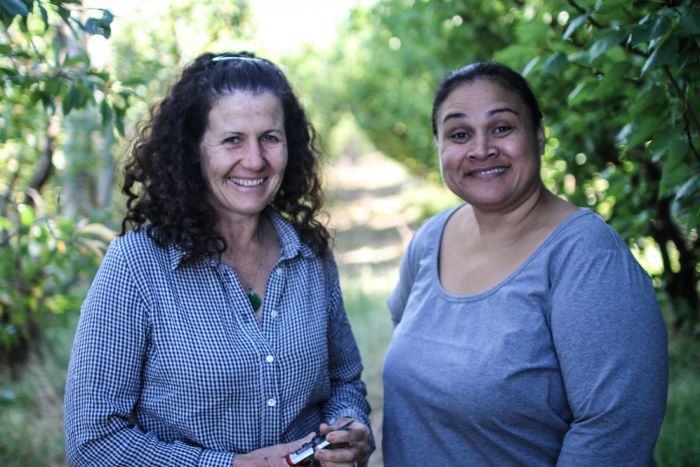 Article on ABC radio about the visit we had from Norma Tauiliili from Samoa.

Article on ABC Australia Plus international radio about the visit we had from Norma Tauiliili from Samoa.

We were one of the farms presenting our story of innovation, diversification and value adding.

Fruit farmers on a mission to boost our backyard bounties. August 2016.

Article in The Melbourne Age, and Sydney Morning Herald about our heritage apple orchard and Grow Great Fruit program.

A Return to Tradition. December 2015. Katie was one of the keynote speakers at the NASAA annual conference and AGM in Canberra.

Seeds of career in organics. October 2015.

Story about Hugh being guest speaker at a public forum on sustainability and climate change in Castlemaine. General story about our journey. Radio interview featuring Dr Ian Musgrove and Katie debating whether growing organically is just a fad or the future of farming.

At the 2015 Mount Alexander Business Awards we won “Business of the Year” and “Sustainability and Environment” awards. Katie’s story of returning to the family farm was told as “Love for the Land Runs Deep”, in the Finding Neverland series of articles, Bendigo Magazine, Issue 33, Summer 2013/14.

We feature in this short video about waste in the food system, made by the passionate people at Sustainable Table. Leader of the Australian Greens Visits the Farm. October 2014.

Christine Milne, leader of the Australian Greens, visited the farm in October 2014. An article about us and sustainable farming.

An article about us in the Bendigo Advertiser about the impact of climate change on fruit growing.

Enjoying the Fruits of our Labours, 2012.

A story about Mt Alexander Fruit Gardens on the Cultivating Community website.